Two friends of mine (Tracy from Canada, and Jorgen from Norway) and myself went to Oslo for Brian´s gig at around 2:30am. It was my first concert of the tour. We arrived at the venue (Rockefeller) at around 3:30pm and I was very surprised that there was nobody waiting at the entrance. Just some "Stage Trucks" busses and the crew bus.
Later on I was told that Brian had arrived at the airport at around 3:15pm, directly from London.
We went to a pub until about 5:30pm, where we met some of Jorgen´s friends.
When we returned to the venue there were 6 fans waiting at the entrance, but we were told that people at the bar in  Rockefeller could get in earlier. From outside we could listen to the soundcheck, where strangely "Dancing Queen" by Abba was being played.
Then we went to the bar (they were playing "Another world") , and after a while more and more people arrived. The only problem was that no one knew exactly whereabouts in the bar the entrance to the concert arena would be. Luckily we found out later on. The admission was at 8:15pm. Tracy, Jorgen and I managed to get to the front row,  facing the smaller 2nd stage in the audience. I went to that same spot at each concert I saw (with the exception of one). Later on in the tour some of the other May-keteers chose that spot, too.
The stage was very small and I was very surprised at that. Everything looked so tiny compared to Brian´s tour back in ´93.  It was a very small rock-club, but very nice because everything was very close to the stage. About 800-900 people attended the concert.
The concert started, fortunately without a support band, at around 9pm. 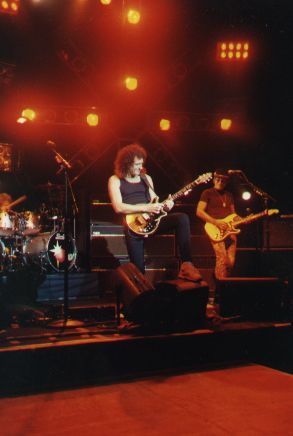 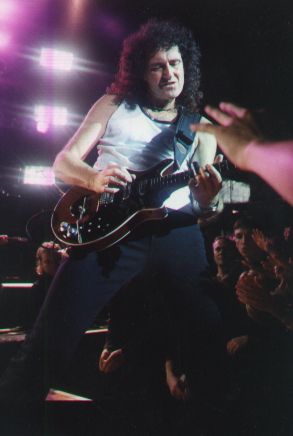 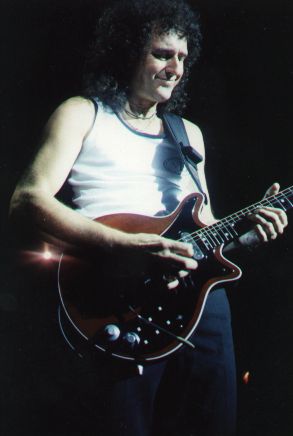 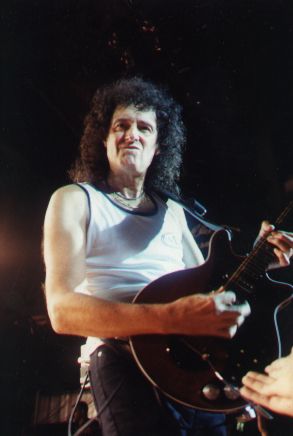 all Oslo live-shots are (c) by Tracy Speers

Interesting facts concerning the show: Brian dressed up as  T.E. Conway for "It´s only make believe" and only a few people recoginsed him. During "C´mon babe" (to the sounds of "Slow down"), a Twitt E. double (Norbert, the merchandise-man) appeared on stage and Brian got ready for his first real songs "Space" and "Since you´ve been gone" (dedicated to Cozy Powell). He dedicated "Business" to Bill Clinton. A funny thing is, that Brian said that his guitar was made out of Norwegian wood.
It was also obvious that Brian had a cold and because of that he couldn´t reach the high notes he is normally able to reach.
After the concert I bought a tour T-shirt and a programme as a memory of my very first concert of Brian in ´98.
We arrived home at Jorgen´s house happily but exhausted at around 0:30 am and went to sleep at around 1.30 am.


read chapter 2 (Stockholm) or go back to the concertography page