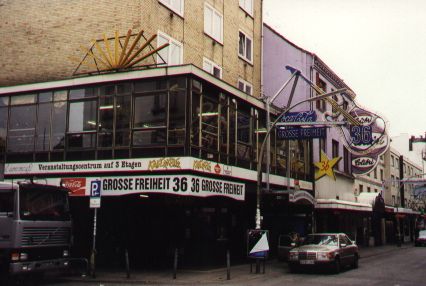 We left Berlin with the direction to Hamburg at 10am and arrived 4 hours later.
Berlin was big and everything was difficult to find, but in Hamburg it seemed to be even more difficult. It took us about 1 hour to find our hotel, a very good and nice one and the best one during the tour!
At 4 pm we arrived at "Große Freiheit", the venue. 5 other fans were already waiting at the backstage entrance but Brian did already arrive. I saw him drinking tea through the open door in the concert arena.
We ourselves got something to eat and as we came back there were already about 20 fans waiting at the main entrance.
Brian´s venue was situated in a very strange surrounding at St. Pauli, famous in Germany for its many sex-shops. Anyway everything looked strange for a big rock-star like him to play here and in such a rock-club, but the concert itself should later turn out to be one of the two bests of my tour.
The entrance was at about 7:10pm. We managed to get our usual spots at the front row, and luckily the stage was low again, as in Scandinavia. 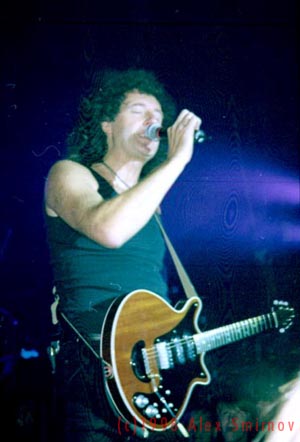 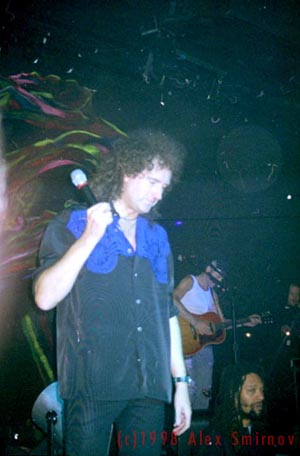 There was standing only, like in Berlin, but this time it was a really nice tiny rock-club. The atmosphere was even better than in Berlin and there were also more people here, about 1100. The fans shouted "Cozy" after "Since you´ve been gone".
The set-list was by far the best during the whole tour! He played "Is this the world we created" shortly before "Love of my life", and after the May-keteers shouted for "´39", Brian said, "You got it" and played "´39 (Intro)" followed by "Let your heart rule your head".  Those two songs were not planned, because they didn´t appear in the set-list as we found out later on.
As encore he played without interruption "Another world", "All the way from Memphis", "No-one but you" and "Slow down".
I got some memorabilia from the show: Eric´s earplugs (*giggle*) and Brian´s plectrum which he used during the acoustic set (or was it Jamie´s?).
Brian was in very good mood and the show lasted 2 hours and 25 minutes!!

After the show we went out and as I saw a radio-reporter and still being on a high after that concert I couldn´t resist telling him into the microphone that Brian is a god...He asked me if Brian is better than Queen and I said yes....Then he asked me about the highlights of the show and I answered "The encores". That interview was to my own surprise broadcasted on radio afterwards. Well, there are embarassing things which just happen...
After the show I waited at the Stage Door.
There weren´t too many people waiting for Brian. I got to know 2 very nice English ladies my age, who also went to see the gigs in Stockholm and Berlin. Their names were Beverley and Karen, and they told me that they went into the hotel in Berlin and had a nice chat with Jamie and Spike in the bar. Brian didn´t get to the bar because he was tired and still frustrated about the guitar problems.
At about 0:10am Brian arrived with Julie, but went straight into the car, again in the Mercedes with Munich sign. 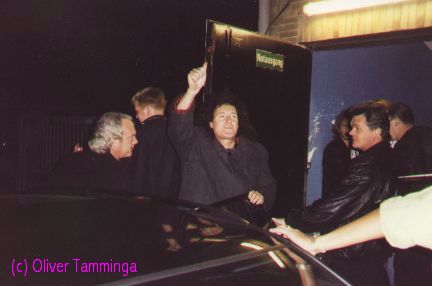 Later on the band also appeared and gave some autographs.
We got back home at about 1:30am.


read chapter 5 (Cologne) or go back to the concertography page