DVD corner
"We will rock you" DVD - Special Edition


www.brianmayworld.com is proud to present you the Ultimate Queen DVD:
The new release of "We will rock you" by Pioneer.

Oliver Tamminga, the webmaster of this site, was integrated into the production process of this DVD and was responsible for many of the extras. 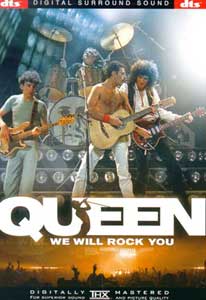 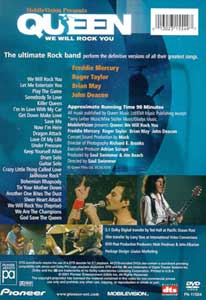 As a celebration of the new release www.brianmayworld.com and Pioneer gave away one new copy of the DVD - for free!

The lucky winner of a brandnew DVD is:
Nikolay Nikolaev (Russia)
Congratulations!

Here are the correct answers to the questions:

1.) What is the name of the successful German TV Quiz show, which featured "Queen" as a topic in 2001, presented by Oliver Tamminga?
RISIKO

2.) Who, in Brian May´s opinion, performed the best Freddie tribute at the Wembley Stadium gig in 1992?
George Michael

3.) At which exact date did the first version of this website went online?
March 29th 1999

4.) What´s the name of the director of "Furia", the movie Brian contributed the soundtrack to?
Alexandre Aja

5.) What´s the name of the director of "Metropolis", the movie which influenced Queen on the video of "Radio GaGa"?
Fritz Lang

6.) Which special guitar solo did Brian perform during his two concerts in Russia in 1998?
Brian peformed a piece of "Kalinka"

7.) What´s the name of the movie, which came into the cinemas in 2001, and which features "The show must go on" by Queen?
Moulin Rouge

8.) In one episode of "The Simpsons" you can see a Queen poster in Homer´s room. The poster features which Queen album?
A Night At The Opera

9.)  At which date and in which city did Brian play live as a special guest lately, together with "The House Rockers"?
July 7th, 2001, Montreux

10.) Photos, which are featured exclusively on www.brianmayworld.com, are used with permission in the booklet of which official Queen CD?
Queen + CD  "Greatest Hits III" (limited edition)


The review of the DTS edition:

In advance: This new edition is honestly really the best of all Queen related DVD´s I have ever seen.
I don´t write it because I was intergrated into the production process and was respsonsible for many of the extras on the DVD, but simply because it´s a "must-have" for every Queen fan
It´s an NTSC edition and you can buy it everywhere in North America, or as an import in the rest of the world.
Feel free to contact me for more information.

The first thing you see when you enter the DVD is the THX logo, which already hints that sound- and picture-quality must be outstanding.
Just very few DVD´s get the THX certificate.

Just afterwards you´re in the intearctive menu, where you select between various options:
Either you can watch the concert directly (and choose between Dolby Digital 5.1 or DTS sound)
or you can have a look at one of the plenty extras on the DVD.

I was very impressed of the quality of the concert:  -Finally- you get all the advantages just a DVD can offer you:
A brilliant sound (you really feel as if you were in the audience; just listen to Brian´s "Brighton Rock" for instance, where you are surrounded to the sound of the Red Special), a brilliant picture (very clear natural colours) and during the whole concert you can choose to read the lyrics of the songs (just turn the subtitles on).
The concert is finally presented in the version it was released way back in the early 80s as it came into the cinemas.

After you have finished watching the concert you should take a look at the extras.
As I was integrated into the production of the DVD, I was glad to give information on some Queen related sightseeing points  in London ("Queendom" - every sightseeing point  is filmed and a text explains the most important facts), to add many questions for the trivia quiz or to write the discography.
You can even find my name on the DVD credits - right after the end of the concert.

I hope you´re satisfied with the extras. In my opinion it´s what a Queen fan expects to be on a DVD.