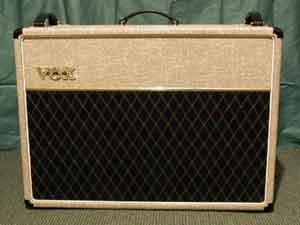 Most Brian May fans will know that Brians sound relies heavily on his home-made guitar and custom-built treble booster. It is also his choice of valve amplifier.
The Vox AC30 is one of the most successful British amplifiers ever made. It is still being produced today with very few alterations from the original design.
The only changes to the design were to add a Stand-by switch and larger vent grilles. This will help to extend valve life.
Brian has used these amplifiers through his entire career with Queen.
His sound is instantly identifiable by its smooth creamy distortion and beautiful clean bell like tone courtesy of the Vox AC30.

Gwen Alexander (PR Manager) and Peter Havard (Customer Support) of Korg UK very kindly supplied me with a brand new Vox AC30TBX
(Tan coloured model) to review exclusively for www.brianmayworld.com
With the aid of my home-made replica of Brian Mays Red Special guitar and the Brian May Fryer Treble Booster I hope to be able to offer you an honest review of the AC30TBX.

The first AC30s were built in 1959 but were not available generally until 1960. They were known as the AC30/4 (four input).
Then in 1960 the AC30/6 was introduced having an extra channel known as the Brilliant channel.
This amplifier featured the Blue speakers, also known as Bulldog.
1961 saw the introduction of the Top Boost. This was available as a retrofit assembly which added an extra ECC83 valve tone amplifier which was fitted to the rear of the AC30/6. This added Bass and Treble controls to the Brilliant channel as well as extra gain.
In 1963 the Top Boost option was added to the AC30/6 circuit. The Bass and Treble controls were added to the top control panel alongside the Cut control.
The AC30 Top Boost became the most popular amplifier of most top 1960s performers. Most notably The Beatles.

This amplifier oozes quality from appearance alone. The flawless Tolex covering is perfectly fitted over the shell of the amplifier cabinet.
Around the main body of the cabinet are two recessed gold plastic strings. One towards the front face and the other towards the rear face.
The speaker baffle is covered with a perfectly stretched diamond fret cloth. It is embroidered with red, gold and green diamonds. The join between the grill cloth and the Tolex covered top part of the baffle (with the gold Vox logo) is neatly finished with a gold T-section facia strip. White piping surrounds the entire baffle.
The cabinet has three sturdy plastic carrying handles equipped with chrome supports at each end. Two at either end of the cabinet and one in the middle.
The three vent grilles on the top are larger than the original ones allowing the heat, generated by the valves, to escape easier.
All corners are protected with hard plastic cabinet corners. On the base are four large heavy-duty rubber feet.
The amplifier is supplied with a grey finish ON/OFF foot switch for the Vib-Trem. 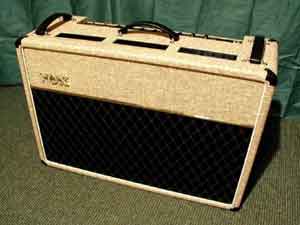 The top control panel has three channels: Vib-Trem, Normal and Brilliant. Each channel has a low and high input.
The Vib-Trem inputs have white markings. The Vib-Trem can be switched on and off using the footswitch supplied.
(The footswitch is connected at the rear of the amplifier)
Each pair of inputs has independent volume controls. The Brilliant inputs are set at maximum top boost.
The controls are set into three sections:

Vibrato:
Speed: The control has three speed settings from slow to fast.
Vib-Trem: Vibrato and Tremolo can be selected.

Volume:
There are three volume control knobs: One for each pair of channels.

On/off and Standby switches: Both switches have indicator lights.

SAFETY: High voltages are present in amplifiers. The power source should be disconnected before accessing the electrical chassis.

Brian May mode.
Because this amplifier did not belong to me I did not remove any valves, as suggested by Greg Fryer, to obtain the ideal situation to replicate Brians signature tone.
I opted to use the amplifier as was.
Using the Brian May Fryer Treble Booster in line with my Red Special replica, I plugged into the high input of the Normal channel. The normal channel volume was on full. All other controls were set to off. (Anti-clockwise) I had the Bridge and Middle pick-ups on in phase. I used the Sixpence coin for a pick.

The overall volume level is controlled by the volume control on the guitar.
With the guitar volume control off you will notice a rather loud hiss from the amplifier. This is normal. This is hiss produced by the Treble Booster.
Turning the guitar volume up very slightly the guitar has a rich clean ringing tone.  Gently stroking a chord provides a sweet tinkling tone that seems to sparkle.
This gentle sound is almost bell-like. It has a good balance of both bass and treble. This sound is reminiscent of the clean passages of We are the Champions.
By turning the volume up a little further the guitar begins to thicken slightly becoming richer with a more crunchy clean sound. At around quarter to a third volume the amp produces a punchy but clean rhythm sound. This would be suited to the intro of Now Im Here.
Pushing the volume up to just over half way creates a more powerful sustaining rhythm feel. This could be used as a general rhythm sound for most of the chord and riff work. This is quite a powerful sound with the distortion ringing through but still there is distinction between the individual strings. Hitting a chord seems to sustain really well with all the depth and clarity you could want. There appears to be a growl on first strumming the chord. Almost like a slight Wah Wah effect.
Taking the volume up further begins to draw in sustaining feedback. The guitar lifts off as soon as you let go of the strings. It is a good idea to stand away from the amplifier to avoid unnecessary feedback. Brian describes the beauty of this level as the amplifier being gently pushed into a creamy distortion. You can actually hear the treble booster push the amplifier over the top at this point. At full volume the guitar sings. The amplifier has this powerful sustaining lead tone and a feedback to die for. Holding a note having endless sustain is a dream come true. After a short period of time wandering up another octave.

(Obviously my pick-ups must be well potted but I can imagine some other types of guitar pick-ups suffering with microphonic squealing)
Switching pick-ups to the Neck and Middle out of phase (Brians screaming setting) the amp delivers an ear-piercing screech at the higher end of the fret board. You can really feel the valves working when hitting the harmonic with the pick and thumb. Lower down the fret board the notes have a slightly warmer feel but still have bite.
I tried many pick-up settings and one that works very well is the three pick-ups on in phase and the guitars treble control turned off. I was able to get a beautiful sustaining rich sound that sounded very close to Brians Cello sound. (Love of my Life) 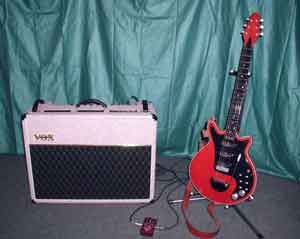 For me the AC30TBX gave my Red Special guitar a new lease of life. It has brought out a new depth in my sound.
The one thing that strikes me the most is how deep and clean this amplifier is. It is a high quality sound that is delivered no matter what setting I may use.
It is hard to imagine such a sound is possible with such simple settings.

With a Red Special replica and a Treble Booster (I recommend the Brian May Fryer Treble Booster) this amplifier is a must. It delivers all that is required for a truly great sound. Im not much of an effect user so this amplifier suits my playing with its simple controls. It does not have an effect loop so in line effects would have to be used.

For general use I use a Rickenbacker and this amplifier produces a beautiful clarity. Obviously the Beatles connection is here and using the Brilliant Channel offered me a warm chiming sound and a perfect bottom end that I have never achieved with any other amplifier I have used.

I have tried many amplifiers over the years but in reviewing this AC30TBX I have found that it is, in actuality, what I have been looking for myself.
I have since purchased this model.

Gwen Alexander and Peter Havard of Korg UK for supplying me with an AC30TBX.
Julian Hemingway for the photographs used in this review.
Greg Fryer for the Brian May Fryer Treble Booster.
Martin Pitcher for additional information.