It was superb, a really great night all round. Even in critical musician mode, I still enjoyed the set of The Bohemians, and the fact that Brian went and told them how good they were adds to that. I know he's a great guy, but half that band aren't Queen fans, so it's not like they wouldn't notice if he was insincere. That's my thought anyway!

The Cross reformed came on probably about 9 pm, with Johnny Marter on drums, Clayton Moss and Jamie Moses on guitars, Spike on keyboards, and Peter Noone on bass.  Blinding set right from the start, with them hammering into Tutti
Frutti like there was no tomorrow. Nice bit of vocals from Mr Moses on Rocky Mountain Way, and then they dragged Mark Shaw out. As always, the ultimate showman, and this time he actually had a stage big enough for him to pose
on, unlike the postage stamp they were stuck with at the Mean Fiddler gig in July! There was a bit of a tenuous Queen link with him doing Rock 'n Roll  a la Roger, and then he moved into Then Jehrico's Big Area (of course! guy's gotta sing one of his own songs!) they then moved into a nice version of Angels, not my favourite song, but a good rendition all the same. And finally we got some Cross with Top Of The World Ma. Superb! I glanced round at that point and saw the entire hall practically shaking the foundations!
Spike then announced that they were going to do a bit of composers singing their own songs, leading to a rather puzzled (and sozzled, as usual) Clayton being dragged to the centre to sing. He does do a superb guitar solo though, pissed or not. Shame he had his Superman t-shirt on - too many connections with the convention he turned up at, as any other women in the bar that
night will tell you! I digress Spike then sang Baby It's Alright from behind the keyboards, and then the lovely Mr Noone decided to sing for us all! Bloody brilliant rendition of Sister Blue. Despite Spike's usual protests about their lack of practice and it being years since they'd played the stuff, the only problem I saw or heard was Jamie trying to figure out when to go "ooh" in one of the songs -hardly an earth shattering crime there! 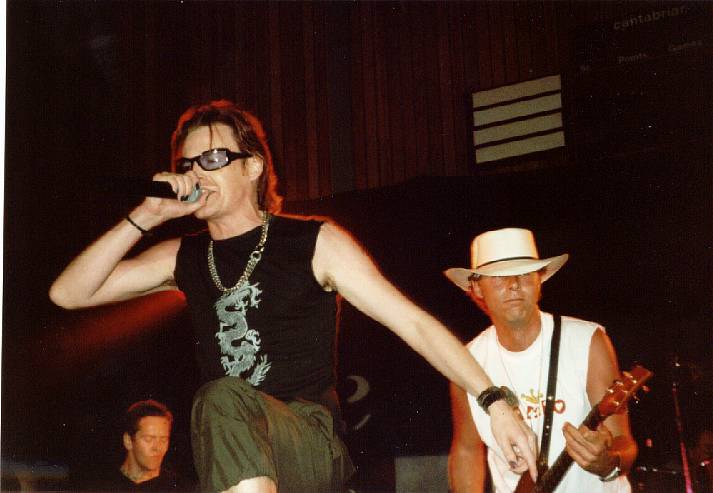 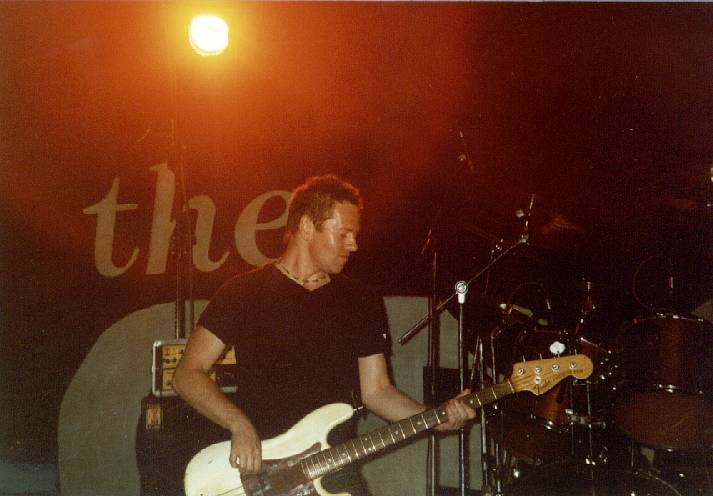 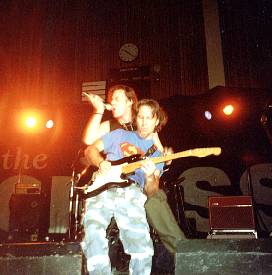 Jamie did a great version of Foxy Lady, then back to the Queen stuff with Dirty Mind, Man On Fire and Now I'm Here. Bit of confusion then when Mark thought he was going off stage and said his goodbyes, only to be yelled at by Spike that he was doing the next song! The traditional rendition of All The Young Dudes followed, fab as ever!

Jacky then got dragged out on stage and was exceedingly brief about the whole thing, saying she knew who we were waiting for so she wouldn't stop!


And finally Brian appeared! Storming version of Since You Been Gone followed the loudest standing ovation I ever heard, gigs included! God knows where we got the lung power from, but everyone just seemed to be on such a high, the atmosphere was incredible.  He then announced that he was going to do us something a bit softer, and after a bit of  pratting about, and Spike and Jamie looking worried, he grinned and said he was sure it went something like that! He then played Last Horizon. then he went on about how he'd started doing old songs in new ways, and that this was his favourite of the lot, and played the slow/fast Hammer To Fall. And then said goodnight and buggered off stage, much to our horror! But, bliss, the lights stayed down, and he came back! 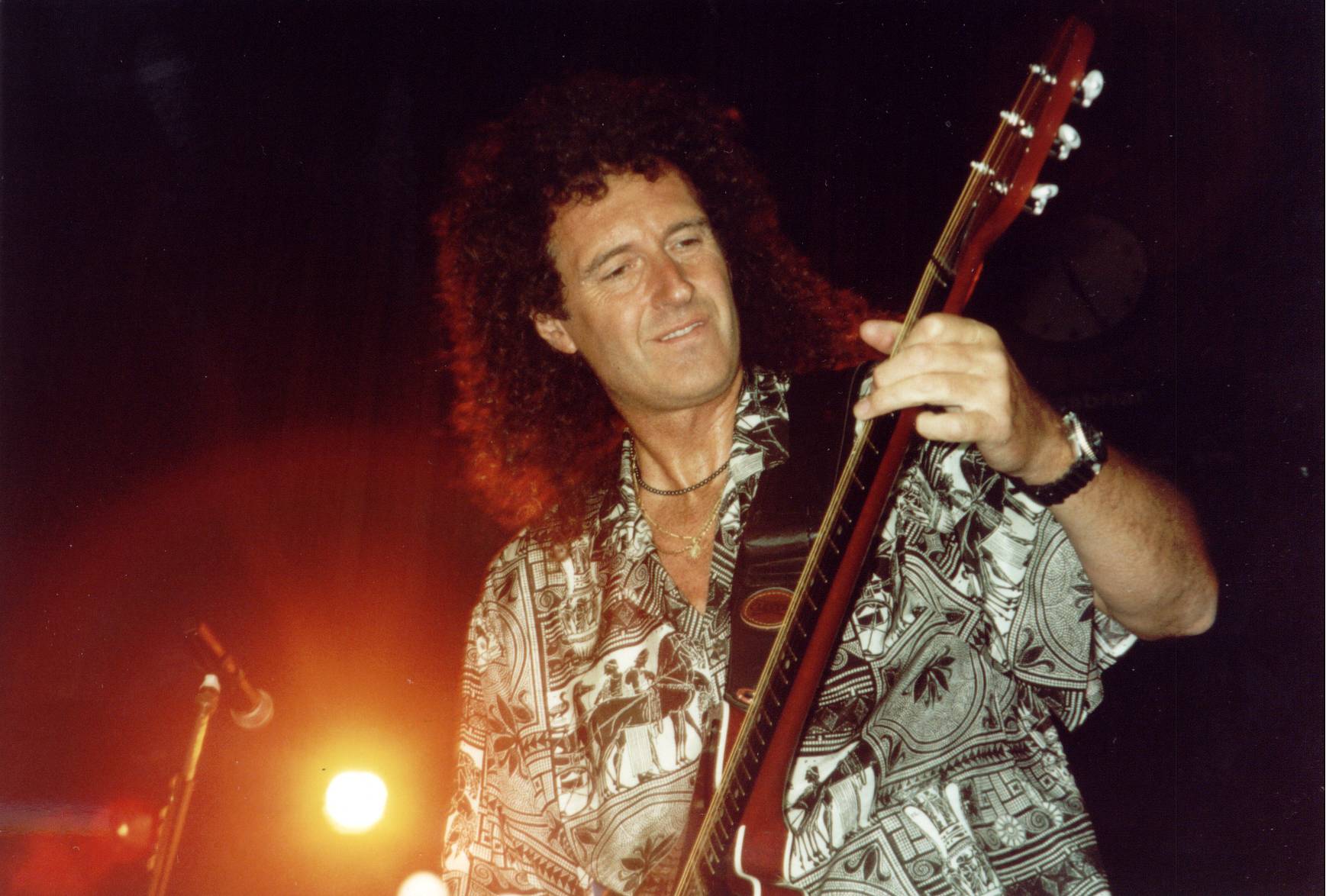 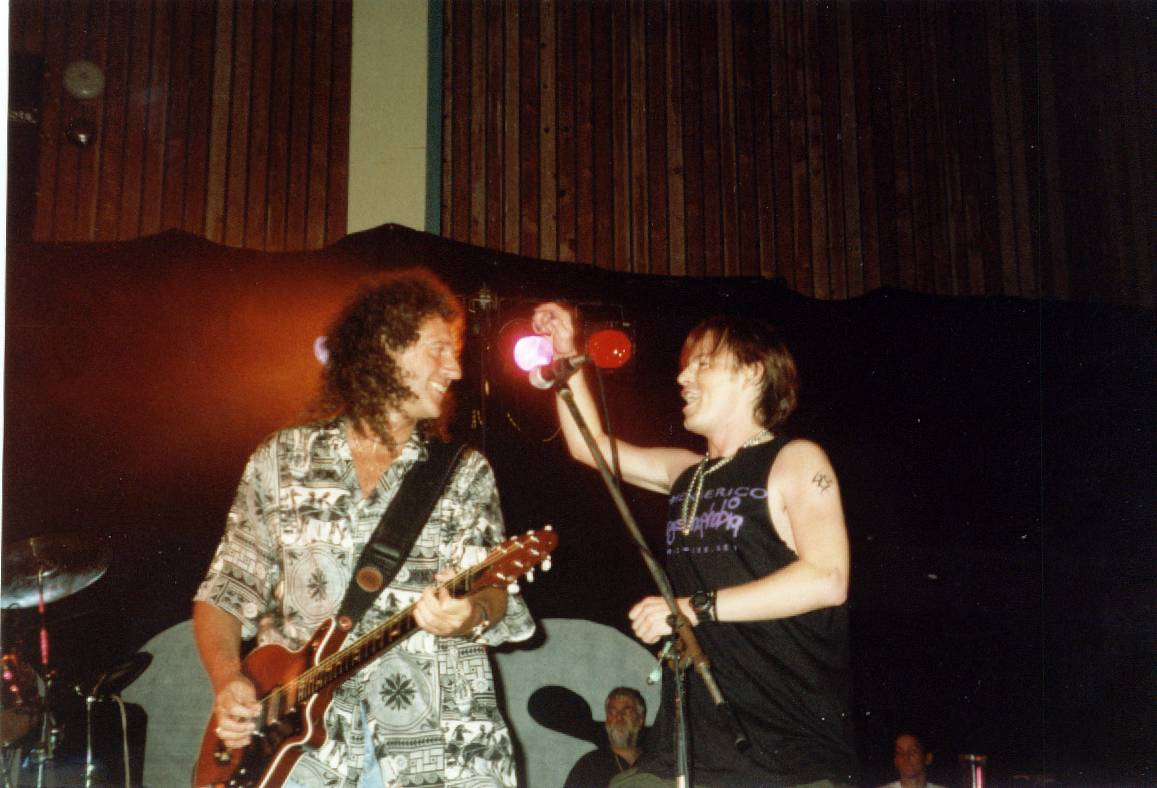 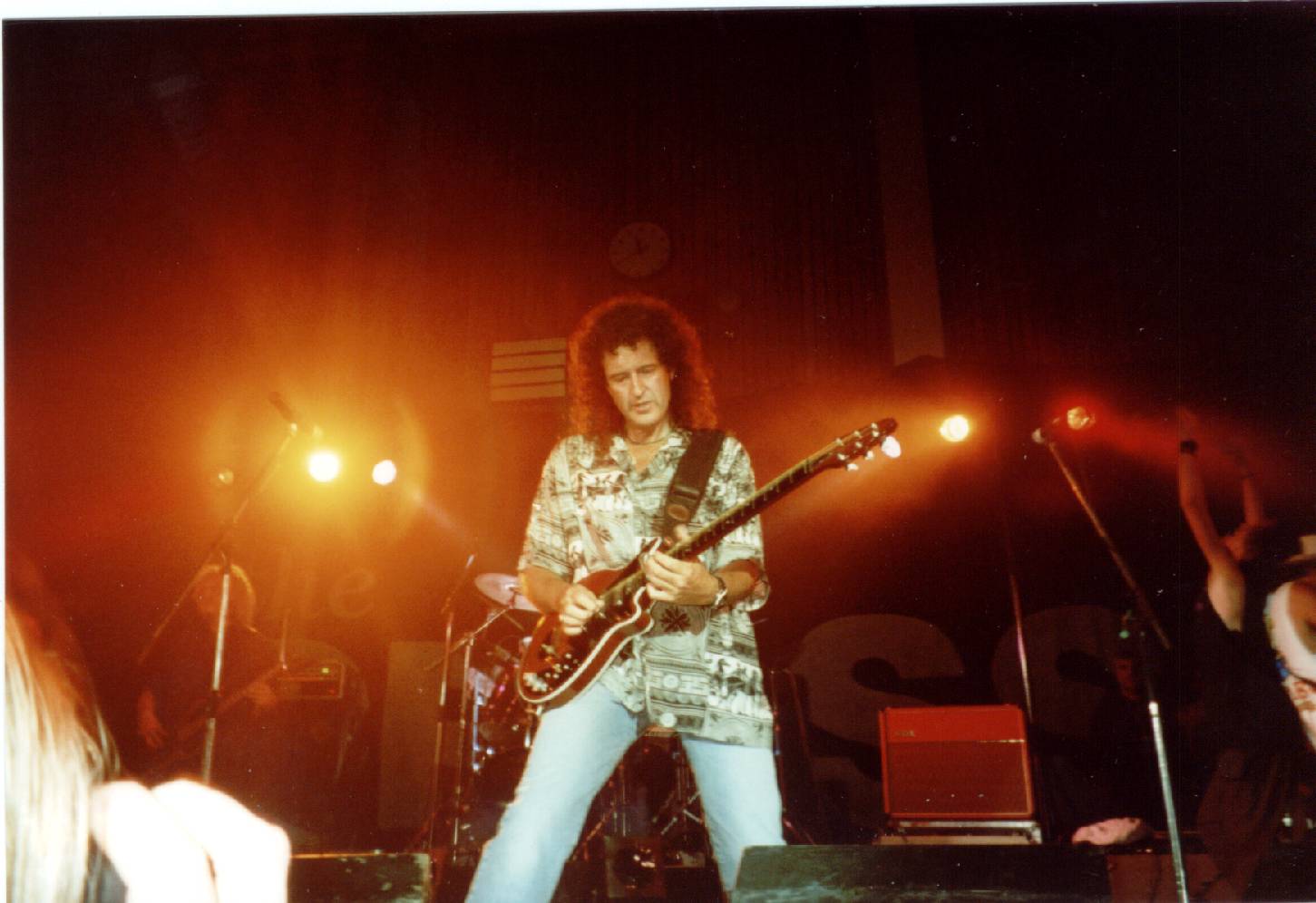 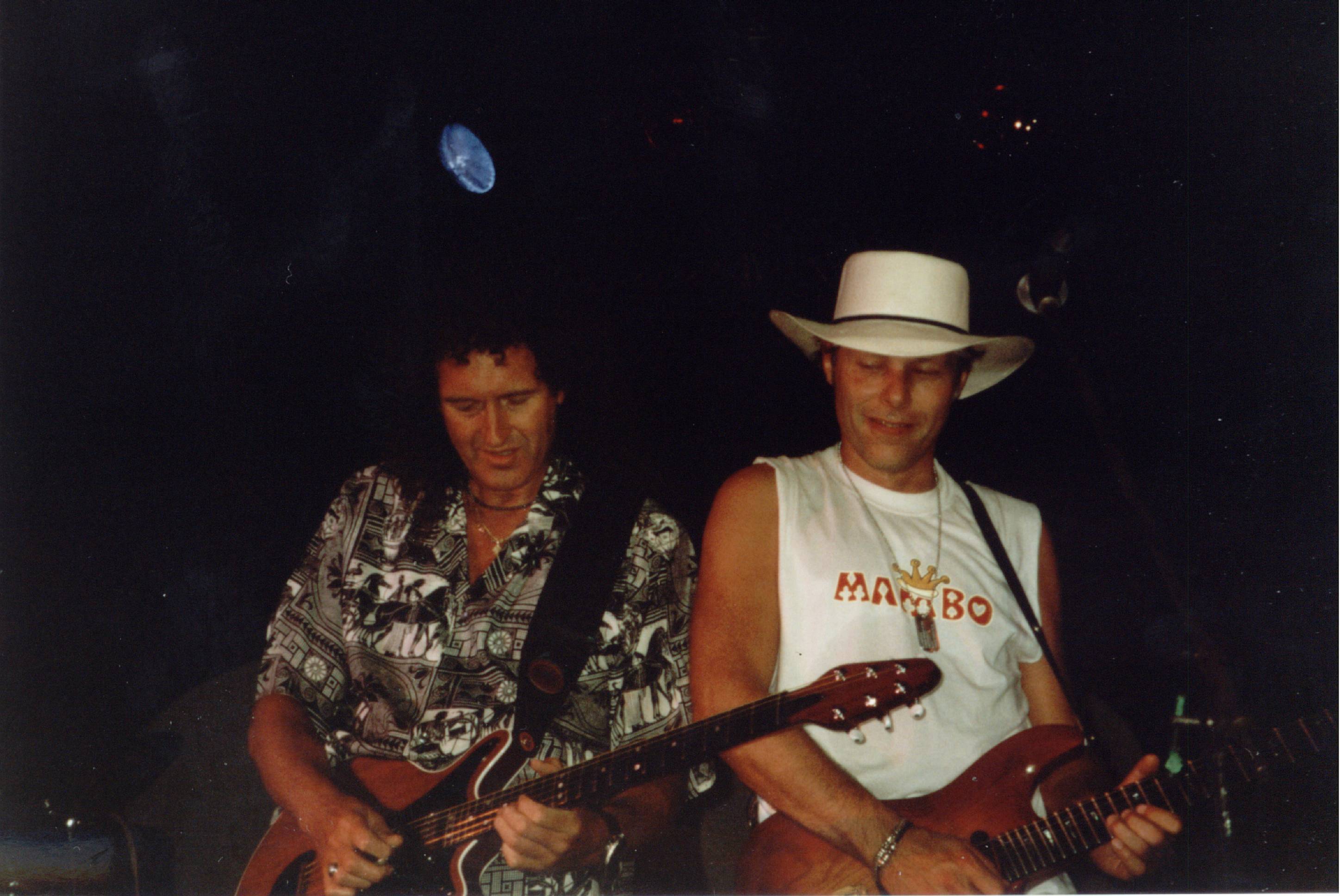 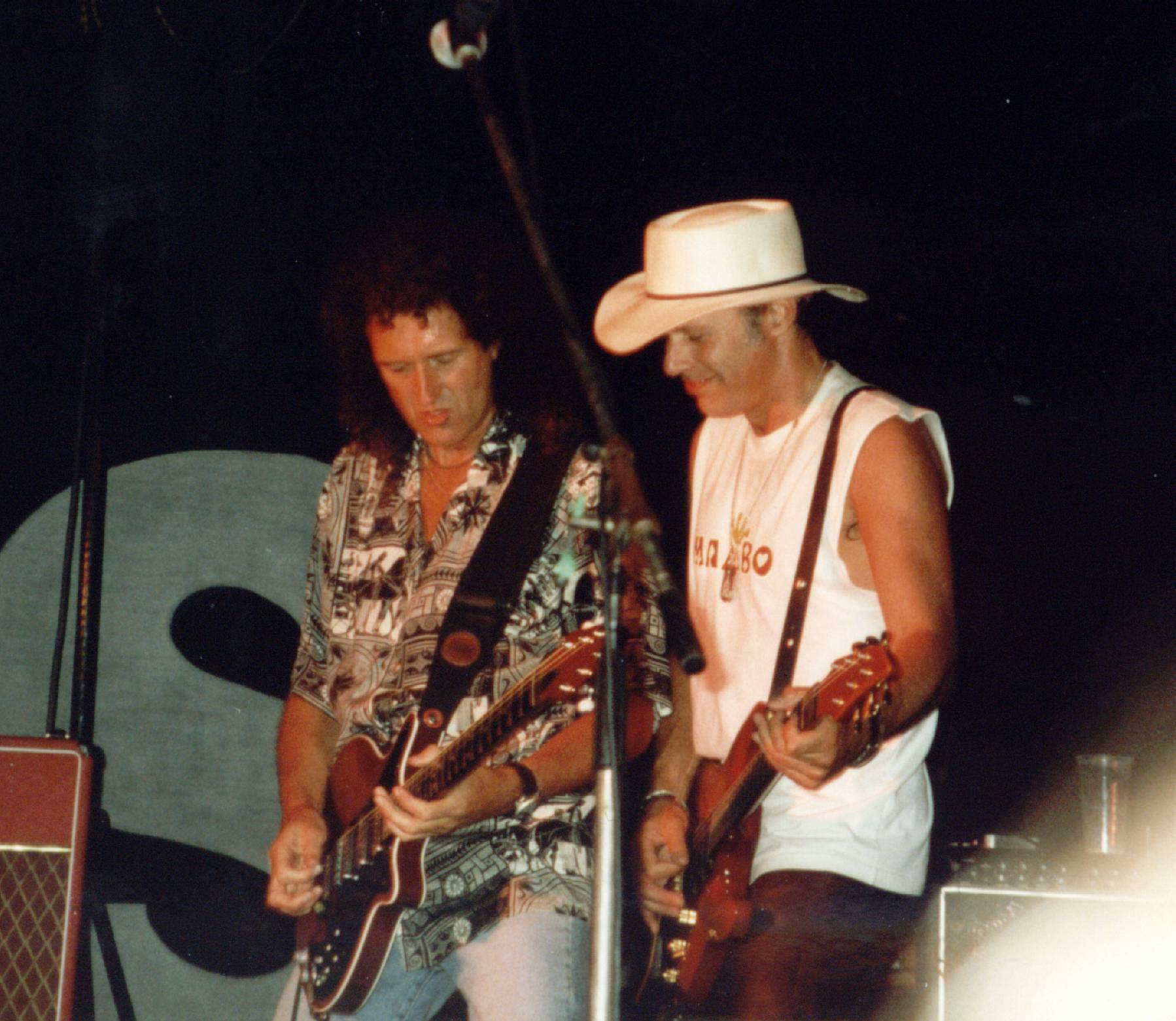 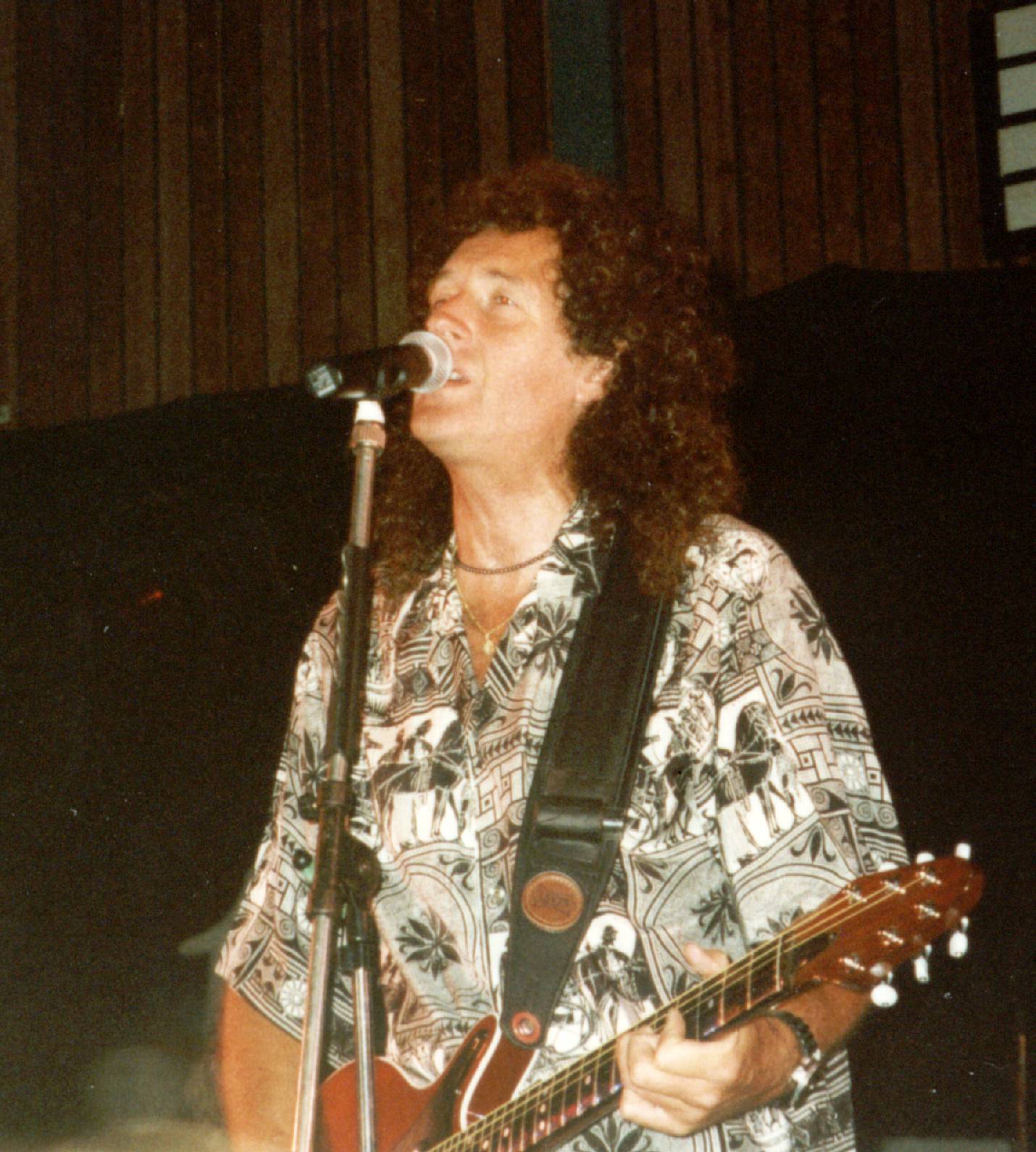 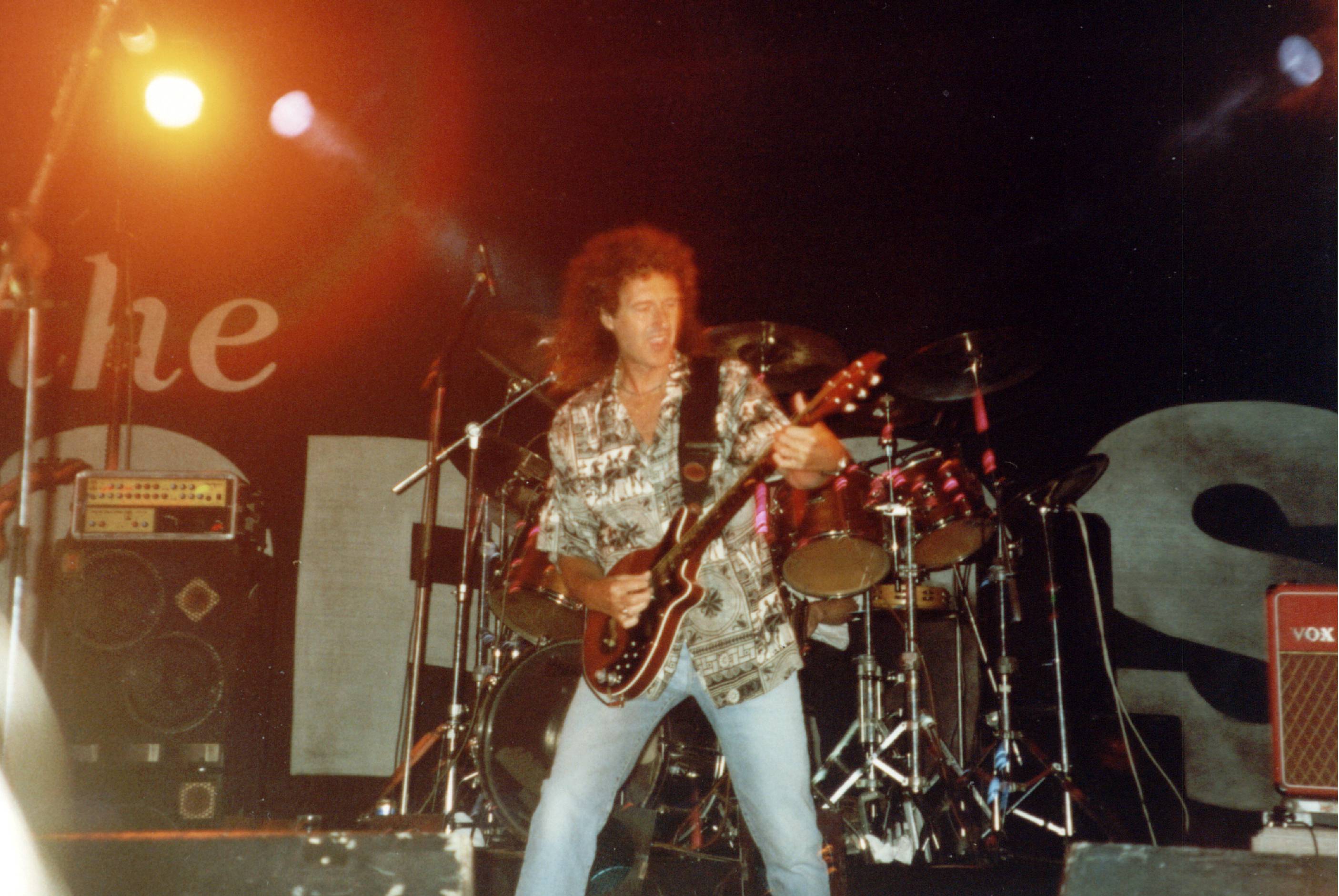 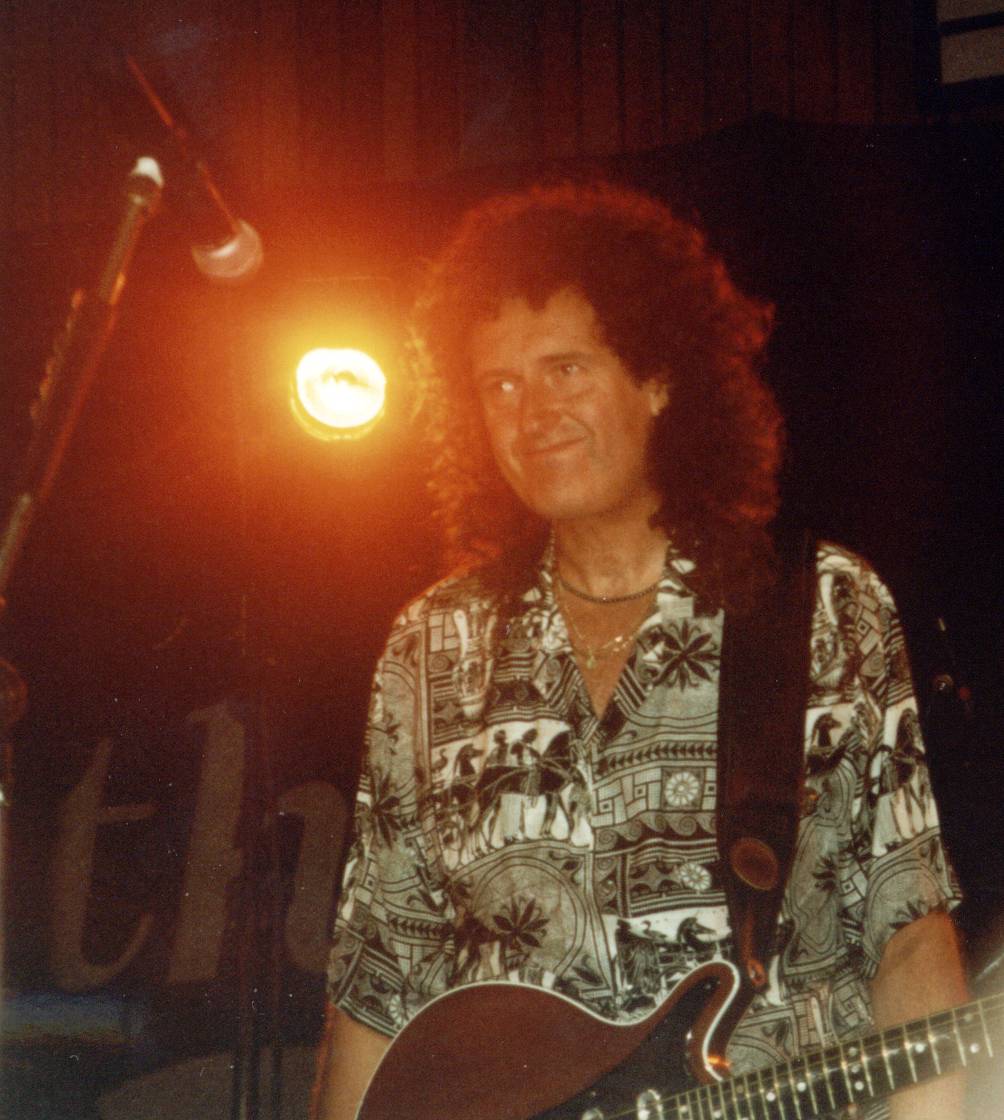 He announced that he'd brought this special guest and he was really excited about it, and then introduced some guy from America that no one round me had ever heard of (Jeff Soto)!  Anyway, he could sing like a dream, and did Dragon Attack, much to my utter bliss - I'd been playing it on repeat for the last week, having had a sudden urge to listen to it again, so to hear Brian playing it - wow! Very amusing to see him and Jamie standing together to sing the "slow down", "low down" bits (you know what I mean!) - we found out later that Jamie's had the words scribbled on the back in really big letters! then the ever predictable Tie Your Mother Down, played with it's usual gusto, and finally he announced that he was going to do something completely different that none of us would have guessed. Too right - he played In The Lap Of The Gods. I'd be willing to bet he hasn't played that since Knebworth in 1986, so a real privelege! And then he went away. 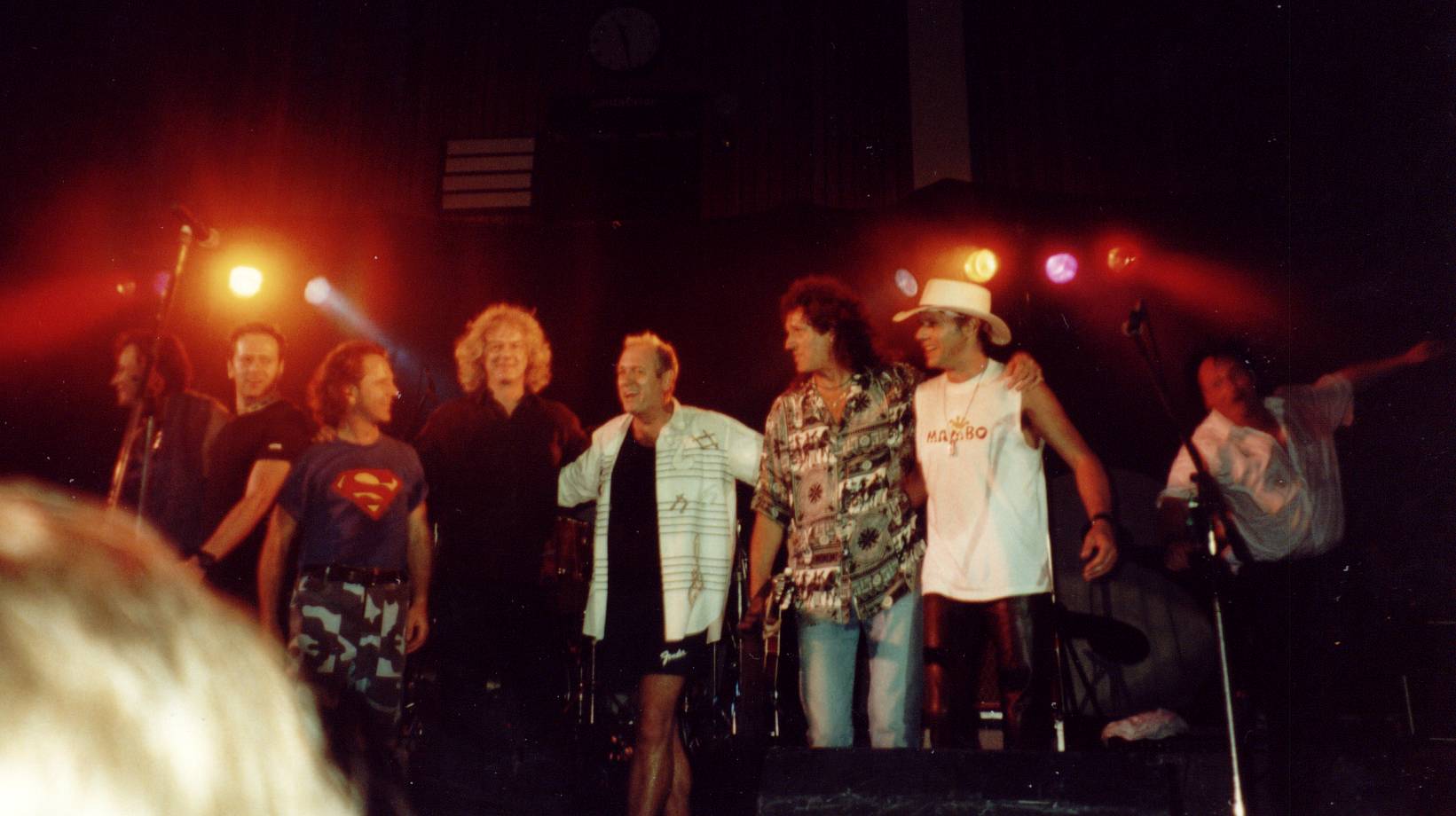 I really have never been in a crowd as high as that one - when the lights went up, people were looking at each other and screaming, or sitting looking stunned in chairs round the edge of the room.  Fabulous, fabulous night, well worth the astronomical amount of cash it took to get me there, not to mention feeling like death right now!

Encore:
Dragon Attack - Jeff Soto/Brian
Tie Your Mother Down - Brian
In The Lap Of The Gods - Brian

A few "thank you´s" -
Thank you most of all to Brian, for never letting us down and making the effort to come and put on such a fantastic and memorable show. We love you, Brian - stay fab.
Thank you to Jeff Soto for an incredible performance and hope you had a safe flight back (and hope you can come back again really soon!)
Thanx to Spike, Jamie, Neil, Mark, Clayton, Peter, Jonny (and Bevo!) for a great show, and to my lovely Queen-friends, for being just that, to Gavin for continuous his impressions throughout the day, my mum,...Oliver for his fab homepage...(!!)...and all -