left: the ticket/ right: a (rather bad) newspaper review

We left Stuttgart with the destination Munich at about 10am., where we arrived at our hotel at about 1:30pm.
We met Endre from Hungary together with my good friend Fumihiro from Japan at the hotel and together we went to the concert-hall "Circus Krone", where we arrived at 4:30pm. It should be the first concert for them, and the last European concert for Erin and Alex.
There were lots of posters hanging out and everything looked good for a great concert. 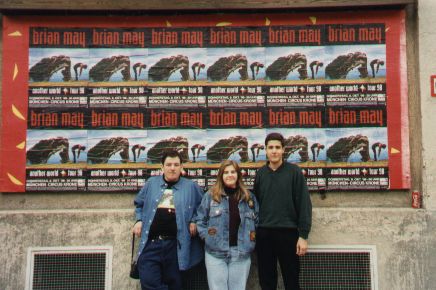 l-r: Alex, Erin, Oliver (in front of some tour-posters)

As we arrived, there was not one fan at all waiting at the main entrance, which was rather strange.
A fan told us that Brian and the band went by train to Munich. Eric Singer came along to the fan, and the rest of the band were sitting in the dining-car.
Admission was at 7:15pm and we got, as always, our usual places in the front row. The support-band of today was the only one during the tour which stayed really in my memory. They were called "Bonfire" and tried to make a lot of action and anticipated the audience to join in. But I found them way too loud and didn´t like them.
There was again the lower 2nd stage, which was good news, and the concert started at 9:05pm and this time the atmosphere was really good again. The venue also looked very nice, a bit similar to the one in Stockholm (of course, it was again a circus).
I have to mention a very funny thing:
As Brian dressed up as Twit E.Conway and introduced "C´mon babe", he said that he had written it last night in the hotel-bar as he was having a drink.
I shouted "No, way" and couldn´t stop laughing, ´cause last night we had met Brian in the hotel-bar in Stuttgart...
There was the usual set-list again, Stuttgart seemed to be an exception because of the seated audience.
In a break of the acoustic-set we couldn´t resist to shout for "Innuendo" and Brian noticed us and laughed, but didn´t play it. 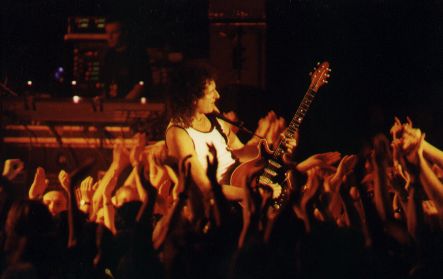 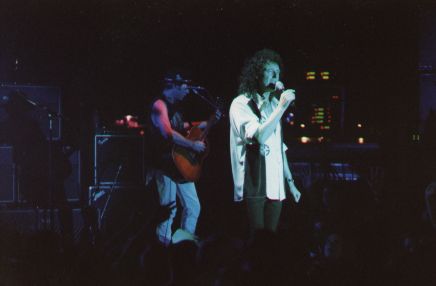 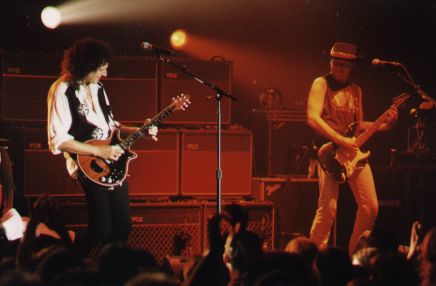 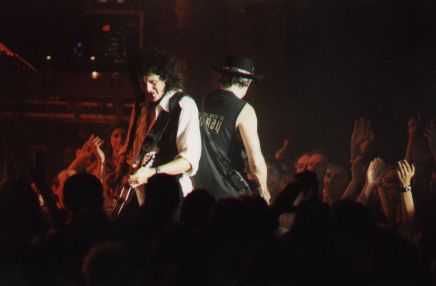 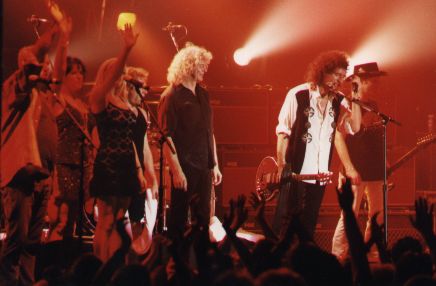 all Munich live-shots are (c) by Emilio Scandroglio, with the exception of the 1st picture in the 2nd row, which is (c) by Fumihiro Nakano

Unfortunately he didn´t play "No-one but you".
There was again the old keyboard-solo (Spike Edney only), but a little different drum-solo, which was also very good and I also enjoyed Neil´s bass solo, which I think got better and better during the tour.

After the concert we met our good Italian friends Emilio and Davide (the leaders of the Italian Queen Fan Club), and all together we wanted to drink something in a pub. But Munich is different. Although you would never expect it, nearly all pubs are already closed between 11pm and midnight, but luckily we managed to find one which was open  for 24 hours.
We ate and drank something and had a lot of fun together. There was a great bunch of friends sitting there together.  Friends from Italy, Austria, Germany, USA, Japan and Russia all having fun!! The convention could not have been more international!
At about 2:30am we went to bed.


read chapter 8 (Vienna) or go back to the concertography page