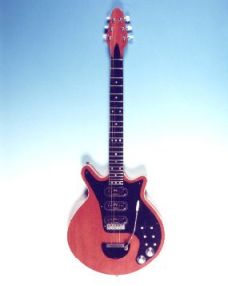 I first became a fan after I heard "Seven seas of Rhye" on the radio in 1974. It wasn't until I bought Queen II that I realised that Brian's guitar had a very strange sound. From that day on I was hooked to Brian May's guitar!
I saw Brian demonstrating his Red Special guitar on a kids programme called "Magpie". It was there that I found that Brian used a Sixpence for a pick. I immediately started to use the same coin for playing the electric guitar. I still use the coin to this day.
I always wanted to have the same guitar but knew it was hand made.
The Japanese Greco Red Special was released in the early 80's but I did not think it was that good. I never bought one. I also saw the release of the early and later Guild copies, which again I felt were O.K. but I thought they looked too plastic with the cumbersome scratch plates.
I spent years collecting pictures and articles to get as much information as possible to make a Brian May guitar.
I met a couple of people on the way who had built their own versions of it and I eventually bought one of them. I was never really pleased with it.
I did manage to get a copy of the plans that one of these people had drawn up with the intention of building my own.
I started to build my own and paid a lot of attention to detail. The project took me from 1996-1997 to complete.
I made sure that all the materials I used were the same as the original to at least get the sound as close as possible. The neck was made from Brazilian Mahogany and the fingerboard was made from Oak. The finger board was painted black. The body was constructed in the same way using the Oak centre section and the Blockboard body shape. The whole of the body was then veneered in Mahogany. I hand made the tremolo block and the bridge with the little rollers in pretty much the same way Brian had. The materials were the same metals.

My guitar had the acoustic chambers and the same pick-up switching system. I could not get original Burns Tri-Sonic pick-ups, so I bought the Kent Armstrong versions that he was building for Burns of London.
After I had finished it I used it for a while to get used to it. 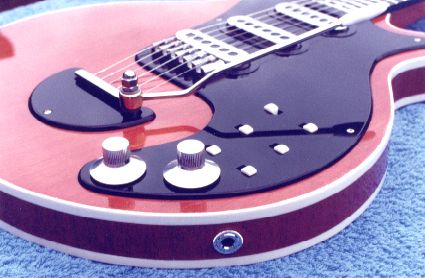 In early 1998 I sent a few pictures of it to Brian May. I enclosed a letter explaining how I built it. I also said that my dream would be to be able to play it through his stage rig and see how close mine sounded to his Red Special.The very next day, Greg Fryer rang me and said that he and Brian
had been looking at the pictures and they were amazed at how close I had made some of the parts. Greg was wondering if I fancied helping him with the restoration. He said that he might need a few parts making for the guitar as they were very worn.

I said that I would be pleased to help in any way I could. The only things that I did make were the pick-up surrounds. Brian's originals were well worn or even missing!
Greg rang me on a, more or less, weekly basis keeping me informed of his progress.
One night we were talking and he said that he and Brian were trying to find a spray booth that would allow him to re-lacquer the Red Special neck and body. (After the repairs). He said that no one wanted to help them. My stepfather had his own spray booth, so I said that they could use his.
A week or so later Greg rang me and said that Brian had asked if it was possible to use the booth to do the re-lacquering! I was absolutely shocked. I never thought, in a million years, that they would take me up on the offer.
Greg eventually brought the guitar body and neck to my home and we went on to spend the night re-lacquering the Red Special in the spray booth. (The Red Special spent the night on my sofa!) 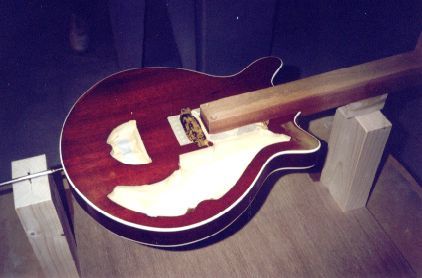 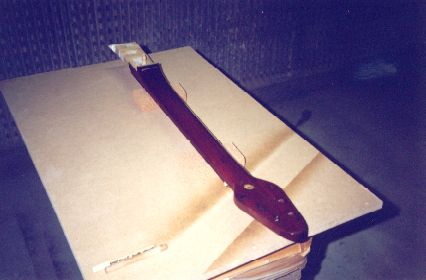 
After Greg returned and finished the restoration job, he rang to say that Brian had invited me to go to his home. He wanted me to bring my replica.Brian greeted me and my family in his kitchen. 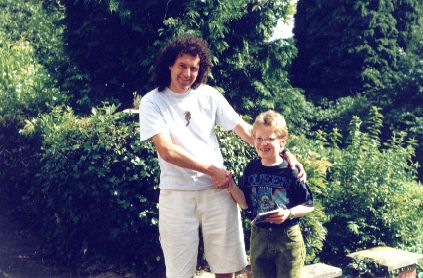 We went on to talk about his and my guitar. He played it and studied it, then he seemed to be very interested in how I had made it.  He gave me his Red Special to hold and look at. It was a great guitar. I was a little worried about handling it but I was thrilled to be holding it at the same time!

He took us into his home studio and then into his hall where there was one of Freddie's piano's.
He let me try my guitar out through his AC30's and the Deacy amp. I was really pleased to hear that my guitar did sound like his. Greg also brought in his replica's for me to play. They were fabulous copies. 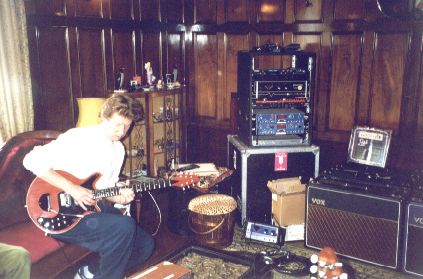 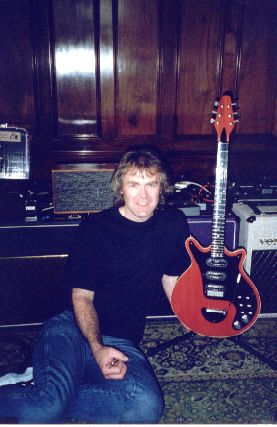 Brian really is a very kind person and he made us all feel very welcome.
To round the day off, Brian gave us all a signed copy of his Another World CD.