As usual in Madrid, Brian always plays in the strangest places. This time the stage is in a disco close to the train-station of the town - very good from a traveller's point of view - but the entrance is pratically very hard to find. It´s so invisible that most of the people wander in the large square below and even though the disco sign is clearly visible, they're not able to find the way to go in. Apart from  this semi-comic description, the disco Macumba is quite famous in Madrid and the "sold-out" for the concert is expected. However its ceiling is very low and that doesnt´t allow to use the complete lights' set.
Shortly before the concert, Julie Glover explains that, unlike in Gijon and Barcelona, there will be some changes in this performance, particularly for  Brian's clothes that will be "rockier" (in fact he'll come on stage being very fit, wearing a yellow and black singlet and a pair of white jeans). Besides, Julie confidently says that the show will be shorter, either because of the disco's strange construction - that offers not so much space for the stagin of the equipment -  or to permit Brian to spare his voice - a sparing which Brian punctually didn´t use in the end, being fascinated from the audience, which is hotter than the crowds of the concerts before.

The set-list didn´t change - and that was clear because these were the first shows of the tour - but there was enough time for improvisations.
Spike Edney's solo is taking shape and Eric Singer draws attention for having perfected and extended the percussion's parts. Brian is  at the top, and amongst other things, for the first time he dedicates "Business" to the U.S.' president, Bill Clinton....something he will do in other concerts, too (and it seems to have brought luck, since the president has been
discharged ). 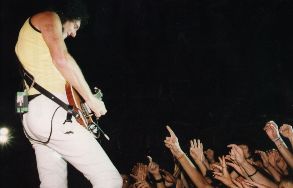 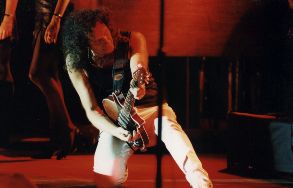 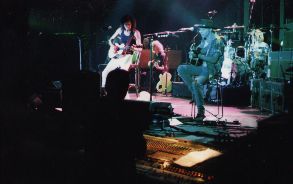 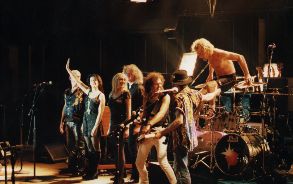 Madrid's fans particulary love "Mustapha", and so they start to ask for it loudly before the "Queen Medley" ( ah, which more appropriate moment ?). Brian can't get out of doing it and it plays a few notes of the opening of the song in the style of "Live Killers" : it's the apotheosis ! At the end of the concert, this time from "Tie your mother down" he immediately switches to "All the way from Memphis". "No-one but you" isn't on the set-list but the wonderful audience of tonight deserve a "bis" and so Brian calls the band on stage again and decides to play it. It could have been from this moment that Brian had the idea to play some extra songs for the crowd. An idea that pushes the band to give always the best in concerts, always different from each other, and an occasion for the public to demonstrate its love and its fundamental role in the show.

From these first three concerts we noticed that Brian has improved his manner of entertainment.
It´s due to the  band and particulary to Jamie Moses,  which enable Brian to improve his voice and to sing songs like "Another World" without his faithful Red Special hung aeound his neck .
After this spanish transfer, "our" tour will re-start from Germany. The band is improving day by day and we can't wait to be in front of the stage again to listen to other great music.


Very special thanks to Davide Traversi and Emilio Scandroglio  for the report.
You can find the original report (in Italian) in issue 23 of WWRY-The Italian Fanclub magazine.
Issue 23 is a Brian May tour-special, so please check it out. For more information please contact Davide.
Also very special thanks to Sara Magini for the translation into English!