world-exclusive to brianmayworld.com - the first review ever! 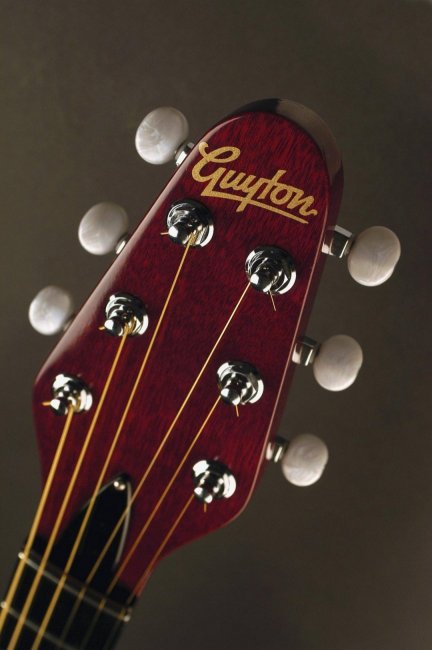 We all know the history behind one of the most incredible guitar creations.
The Red Special was a combination of a father and son project, and their respective intelligence, to create a unique guitar with some very different but important features through many ideas and experiments. Their designs produced what is possibly the forerunner to the modern day rock guitar.
The Red Special is still functioning almost 40 years on. Besides the recent restoration by Greg Fryer (to prevent the guitar from suffering further severe deterioration) it has stood the test of time.
All the original parts on the guitar are still there and the knife-edge tremolo system still performs perfectly without showing any signs of wear. This all goes to show that the whole guitar was originally designed to last.

Andrew Guyton has taken on a very difficult project. He admits that the guitar was a lot different to how he imagined.
Recent X-rays that were taken of the Red Special at a London hospital revealed the details of the hidden cavities. It also gave him a clearer idea of the construction.
Viewing the original plans (drawn up by Brian and his father) and stripping the original guitar down to take measurements, Andrew came up with detailed plans which were transferred to CAD for extremely accurate plans to work from.

Two prototype replicas were constructed using the same woods, glues and metals as used on the original.

The neck was carved out of one-piece mahogany and has an oak fingerboard. It bears the fixing bolt and the exact same truss rod design that is wrapped around the fixing bolt and runs through the neck at an angle to the fingerboard. The adjustment is made at the headstock end with an adjustment nut.
The fingerboard has the same 7 ¼ inch radius and, zero fret and brown Bakelite nut. The oak has been blacked and lacquered. 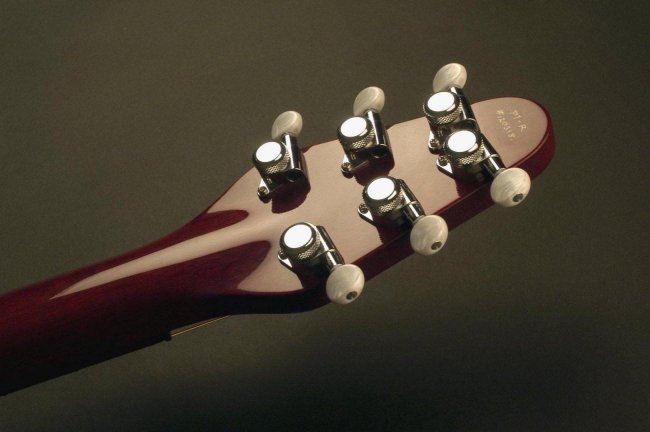 The neck profile is replicated with the same width and depth. It has a deep but gentle C shape from the body end to about the 7th fret where the profile begins to change to a gentle V shape. The back of the neck is blended into the back of the headstock as the original.

The body construction is very complex. The general shape of the guitar is constructed out of two halves of Blockboard.  There are oak inserts in the two halves, which make up the central core of the guitar. The cavities are created by the removal of most of the inside faces of the blockboard creating sound chambers. The control cavity has different levels of cavities creating an unusual design. All the internal cavities have been replicated using the information that Andrew has obtained. 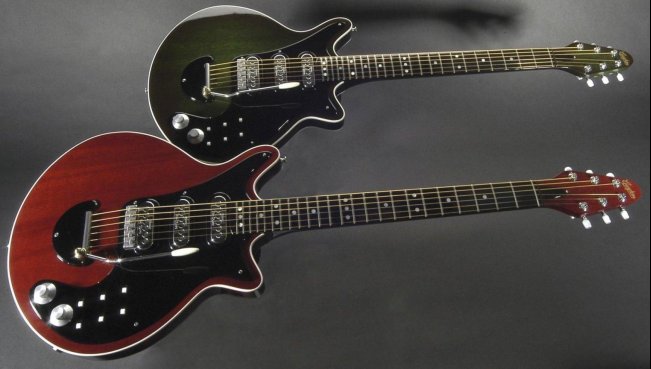 The body is screwed and glued together with the screw positions the same as the original.
This creates a very solid structure.
The binding is of the same size and is joined at the neck heel with a larger piece of white plastic that is blended into the neck as it joins the body.
The front, back and sides of the body are then veneered with mahogany.

The tremolo system has been faithfully replicated and is made to a high standard of quality. The springs have recently been upgraded (on Brians request) to give the tremolo the same feel as his own.
The tremolo is adjustable via two holes either side of the rear strap button. A screwdriver is inserted into the hole and locates in a slot in each adjusting bolt. This eliminates the need to keep removing the tremolo cover plate to make adjustments.  Again, this is a feature on the original guitar.
Andrew has carefully shaped the plastic tip on the end of the tremolo arm exactly like the original one that was made from a fat knitting needle. 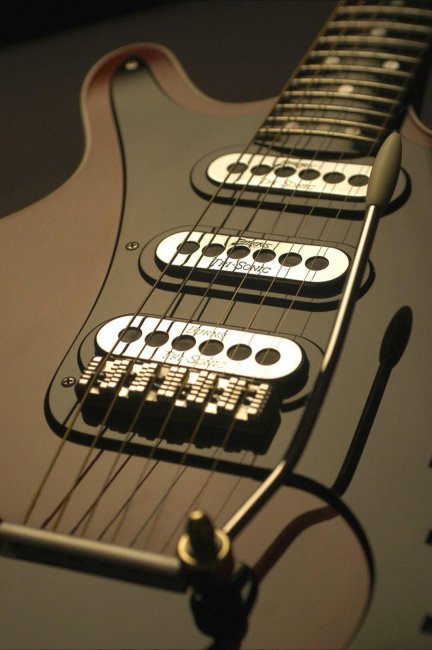 The roller-bridge has been replicated exactly. The rollers are one-piece stainless steel and rest on the top of the individual aluminium bridge pieces. The string holds the roller in position. Snapping a string will cause the roller to drop out of its intonation slot. This is the original design and has been faithfully replicated.
The bridge pieces have been nicely rounded and smoothed to a mirror like finish.
The same locking tuners are fitted with pearloid tips.
The volume and tone knobs have been made with the same straight knurling and red dot on the lower skirt.
One thing I found very interesting is that Andrew went to a lot of trouble to modify the white slide switches. On the original guitar the switches have smaller actuators. They are also long obsolete. Andrew has stripped down each switch and had each actuator reduced in size to give the same appearance on the scratchplate. He has also removed the click from each switch as the originals move freely without a positive on/off movement that new switches have.
The original jack socket is also an obsolete item. Rather than use a barrel jack he has chosen to use an open jack socket which gives the same appearance on the edge of the guitar.
All the original electrics are mounted on two aluminium plates. One plate contains the switches and another holds the volume and tone pots. 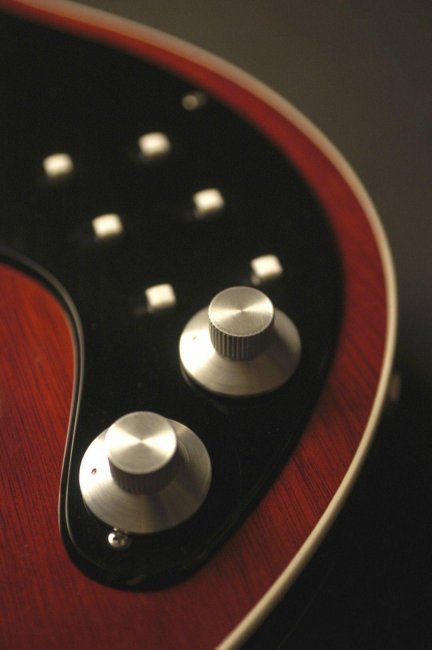 Andrew has hand-made both plates. The plate containing the switches is mounted just beneath the scratchplate and held into place with two screws on wooden supports and a leg at the back of the plate screwed to a lower level in the control cavity. The volume and tone pots sit on a kidney shaped plate that is set into the body lower down on a square wooden mounting block with a screw. Certainly an unusual idea in its day but these are well fitted and accurately placed.

The scratchplate, tremolo cover and truss rod cover are made from black Perspex. The shape has been taken from the original. It has the same cut out near the bridge so that the scratchplate can easily be removed without removing the strings or the bridge. The edges are nicely bevelled. The screws are positioned in the exact same positions and the same types of screws will be used.

Both prototypes were constructed exactly the same. Andrew will be making 40 in the original Red colour and 10 in the Green colour.
The one thing I liked about the finish on these guitars is that the grain was completely visible through the stain and lacquer. I thought the grain detail was stunning and certainly not unlike the original.
The neck and fingerboard were very slippery and very nice to handle. 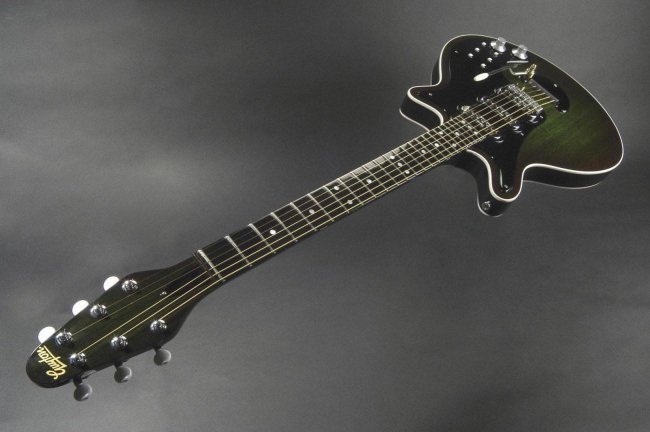 Although the Green finish was stunning, I personally preferred the Red one. The colour was so close to how I remember the colour of the original Red Special when I saw it in the flesh back in 1998.
It would seem that Andrew had carefully chosen the veneer for the front of the guitars to have the dark mahogany stripes like the original.

I played the prototypes through a Vox AC30, treble booster and played with a Sixpence.  There was very little difference between them. I did find that the Green model was a little warmer in tone and the Red model was a little brighter.
Considering both guitars were made with exactly the same construction and materials I guess the slight variations in the wood and pick-ups can only be the reason for the slight differences.
Immediately obvious was the ringing sustain. The fingerboard was so well fretted and smooth that each note sustained wonderfully. String bending provided no choking, as the strings were set quite low. A 7 ¼ inch radius is certainly not that bend friendly but was not a problem on these guitars.
You needed no effort to play chords. A light touch is all that is needed for these guitars to perform.
I could find no problems playing anywhere on the fretboard.
The pick-ups had been nicely balanced. I was fortunate to have played these guitars after Brian had put them through their paces. He had asked Andrew to tweak the pick-up heights to his taste while A/Bing them with his own.
There is a lot of warmth to the tone of these guitars. I think I would have expected that, as Brians tone is very warm to my ears. It was a rich tone but there was also clarity. I think the combination of the cavities gives it a rich sound and the hardness of the oak gives it springiness. There is always a gentle twang to it.
The combination of the pick-ups in and out of phase made no real change to the volume level. There was no sudden drop in volume from an in phase sound to an out of phase sound. This could well be that the pick-ups were so well balanced that they complimented each other in any setting.
At low volume the gain disappears and gives a sweet clean sound.  A gradual build up on the volume control slowly brings in the gain to a real powerful sound with the bridge and middle in phase. I tried all pick-up settings and I could hear them all, as I would expect to hear them. The neck and middle out of phase really did screech. Almost ear piercingly bright. 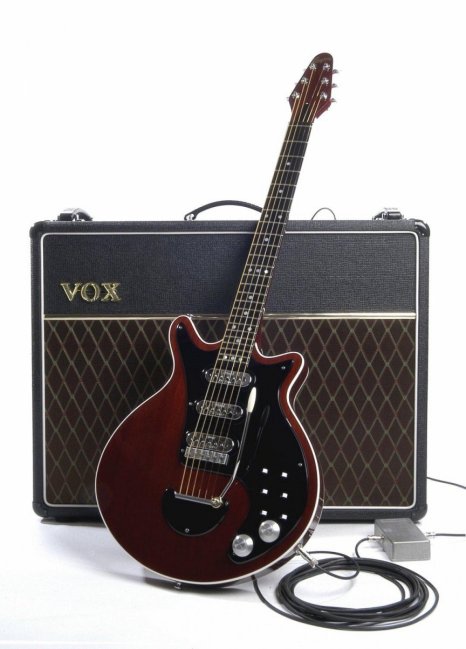 The feedback sound was very wholesome and controllable. The pick-ups did not go microphonic. There was a climbing effect on the feedback. Moving up an octave after a short time. That was good to hear. It also did not die off.
Overall I felt that these special pick-ups really were something special. Replicas of a tried and tested set of Tri-Sonics have to be good!
The tremolo system was fantastic. You can drop the bottom E to nothing and there were no tuning problems. In fact I checked the tuning three or four times while playing and I never needed to tweak it once. The tremolo was very positive and there was no play in the tremolo arm. The arm was not too loose or too tight. This is quite important if you want a delicate ripple to the notes.

Having spoken to Andrew Guyton (on various occasions) about his guitar construction and his own personal thoughts on the Red Special, I genuinely believe he is as much a fan of the guitar as many others and I are. He has a genuine respect for Brian and Harold Mays creation.
He explained that he wanted to replicate the entire guitar from scratch and that he wanted every part of the guitar to be as close as is possible. Some parts of the original guitar are now long obsolete but Andrew has found ways around this (as I have explained in parts of this review).
These guitars will be a very important part of the history of the Red Special. The construction has been relived by Brian 40 years on and must have brought back many memories for him. From this, some very special replicas have been born.
Brian May, Pete Malandrone, and Greg Fryer have worked closely together with Andrew Guyton to help produce these prototypes. The production run will be no different to the prototypes.
To any real fan of the Red Special these have to be the ultimate replica. They are expensive but they are the products of many months of research and construction. They are a limited run and will all be instant collectors pieces.
But I have to believe that they have been made with as much care and enthusiasm as the original creators.

the report is (c) by brianmayworld.com